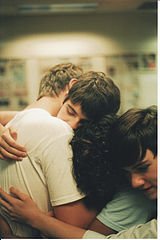 Sexual orientation is often more complicated than we like to acknowledge, and it can get confusing.  Gay men sometimes find themselves having romantic feelings for a woman.  And straight men….  Well, bromance is a word that developed 10 or 20 years ago to describe the intense feelings some men have for one another – brotherly romance, as it were.  It isn’t gay, they say, because it isn’t sexual.

But what if the feelings don’t stay in the usual boxes?  A little post headlined “I am a guy whose bromance has turned into a gay relationship” has generated hundreds of comments and suggests that feelings surprise us.

We argue like boyfriend and girlfriend….we then make up and play fight by wrestling/teasing/tickling one another which brings us to now… one of those play fights got a little out of control and ended up in a drunken make out session which neither of us will admit to.

The post is interesting, and the comments are even more interesting:  other men who’ve found themselves in similar situations; straight, married guys who find the whole idea really sexy.

That’s not to say that most bromances turn sexual.  The whole point of the term is that the relationship isn’t about sexual intimacy.   But that may not always be a static, carved-in-stone thing.

While there is still a lot of homophobia out there, clearly there is less than there used to be.  As being gay seems less strange, more men find they have some degree of same-sex attraction within them.  Does that mean they are gay?  Probably not.  Sexual orientation is more than what you do – it is how you identify, what you fantasize about, your deepest attractions.  Who you have sex with is obviously a significant component, but it is not the only one.

Does the story suggest that the whole idea of dividing people up into categories like gay, straight and bisexual don’t describe everyone’s reality?  I think so.  I can imagine a time a few decades from now when people find those terms to be quaint.